My friend Lesley has this thing where she says “make sure you’re playing the real game, not some more complicated game you’ve made up for yourself.”

In response to a friend, I wrote the following follow-up:

I SHOULD probably update the piece with that very conclusion (note: my friend wrote some commentary saying that ‘the post unintentionally shows the major limitation of analogising games to life’).

You’re right, I think I unintentionally made that point — I was involved in maybe five other discussions since writing that post and I eventually came around to your view.

I now think that:

The line between 1) and 2) is exceedingly thin. And ultimately only you know if you’re lying to yourself.

I’m sure @Lesley might have more to say about this

It would be interesting to look at the “Levels of Abstraction” through this lens.

I agree! I think this might have been mentioned on Twitter (or maybe I’m imagining things), but someone observed that ‘a scrub move at one level of abstraction might not be a scrub move on another’. It might have been you; forgive me if it was and I’d forgotten, @cwong.

Ha I took a look back and I did write in this forum: 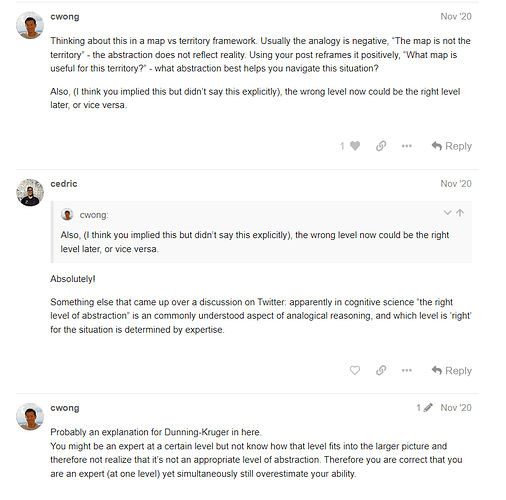 Also has anyone read Harry Potter and the Methods of Rationality?
There was one scene when two characters were talking about x-order level thinking and game-theorying out the implications. The last response was “I’ll be one level above you.” I probably butchered the story but it was hilarious and this discussion made me think of it.

Also has anyone read Harry Potter and the Methods of Rationality?

I’m probably completely hijacking this thread and changing the topic, but I enjoyed that book more for the story than anything else. In general I tend to find myself suspicious of the rationality community. Bless them, they’re nice folk, but they’re not likely to play to play or play to win so much as sit down and have a 60-hour conversation about what it means to play to win.

Ha yes! My reaction exactly! The story was really really good and it got me interested in the whole rationalist community idea but I found the community was a lot of navel-gazing. And I thought that they were subject to a ton of cognitive biases that they themselves didn’t recognize. I think the stopping point was when I heard about the basilisk thought exercise and the reaction to it.

Interestingly, I listened to Julia Galef’s podcast when I was exploring the rationalist community and I only listened to one episode because I felt she had a lot of cognitive biases that were unrecognized. But her book has good reviews and is about having an open mind. So either I was wrong or she’s recognized those shortcomings.

I think we all have cognitive biases, Chris, that’s what makes us human …

I kid, I kid — but I should note that I considered myself a member of the rationalist community for a time. I still have a soft spot for them.

I’m happy to continue this discussion in another thread, if you’d like: https://forum.commoncog.com/t/the-rationalists-vs-the-empiricists/639 — I think this thread should be about scrub behaviour instead …

I am a big fan of Sirlin’s and was delighted to see it pop up on the radar here. After reflecting on it further, I had an interesting idea about this come to mind that I will throw out there for consideration.

There are three approaches to how you can approach an activity:

A virtuoso is someone that can do all three of these at once. A scrub is someone who only does #3. Getting #1 without #2 is a tragedy, regardless of #3. Getting both #1 and #2 without #3 is a good outcome as long as you aren’t needing public opinion to achieve your goals.

I think it does, if one is actively trying to win a game in some fashion.

There are circumstances under which ‘being a scrub’ involves ignoring the hard version of a game, gliding past the ‘actual’ game, and letting mediocrity drive. (I’ve found several instances of this during the pandemic.)

This is explained reasonably well by Venkatesh Rao’s Survival of the Mediocre Mediocre.

Mediocrity is about slipping in the thin end of the wedge of evolutionary infinite-game advantage into current finite-game performance. Moravec’s wedge is about not playing the game defined by the current cost function with full engagement in order to sneak out of the game altogether and play new games you find in the open environment.

I would be willing to bet that some portion of folks who are described as ‘maestros’ are actually doing this.

This might fall under the rubric of ‘playing a different game’ in the discussion upthread, but I think of mediocrity as described here as taking much less effort than that. Survival of the Mediocre Mediocre

There are three approaches to how you can approach an activity:

A virtuoso is someone that can do all three of these at once. A scrub is someone who only does #3. Getting #1 without #2 is a tragedy, regardless of #3. Getting both #1 and #2 without #3 is a good outcome as long as you aren’t needing public opinion to achieve your goals.

I’ve had some time to think about this, and you know — I can’t find any exceptions. I quite like this! Thank you and well said! <3

I had not encountered this idea before - thank you for bringing it up!

I do agree that it is probably best to consider it a fourth approach. Let’s call it “do no more than is required by the situation to avoid intolerable consequences”.