In my last post I examined how first principles thinking fails. This post is going to be about a single, concrete example — about an argument that started me down this path in the first place.

So I just realised, from talking to @kirso, that people don’t know how to add comments for posts. You have to go to the blog post you want to comment on, scroll to the bottom, and hit add comment … otherwise the thread is invisible in the forum.

The way I’ve set it up, writing the first comment makes the thread visible!

So here’s the thread for the cash flow post

After a good read and then screening through comments on Hacker News I got smarter in two ways:

Anyways, kudos on the article, great job as usual

I will add one other thing:

A surprising number of comments on both HN and Reddit have focused on the logical flaws in the original ‘Startups Shouldn’t Raise Money’ argument. I can see why they’re nitpicking (the argument isn’t 100% watertight) but two things:

First, if you steelman the argument, it’s actually a rather reasonable way of looking at the issue. I can see where the author is coming from — like him, I’ve noticed that bootstrapped companies tend to be more conservative with their capital. And bootstrapped companies also ‘fly closer to the ground’ — in the sense that they are more wary of making expensive mistakes.

(Speaking as someone who has been in this situation — it’s a materially different feeling when you commit a business error, and burn hundreds of thousands of your own hard-earned capital.)

One actionable lesson here: when you lay out some logic to a more experienced practitioner, and you see them scrunch up their face and react viscerally and say things like “I don’t think that’s the right way of thinking about it”, you should pay close attention, for their experience is likely telling them something that you don’t yet understand.

The natural rejoinder to that is “Well, but what if their experience is blinding them to a better way of looking at things?”

This is a great question, and it lies at the heart of this discussion! My current position is that if you’re new to the domain, you should probably conclude that you have a better way of thinking about things if and only if you can understand the more experienced person’s reasoning and worldview first.

To be fair, I think most of the people who read the piece understood this, and I suspect what I’m saying is common sense. It’s just that I found the nitpicky comments rather surprising.

Any book recommendations for grokking cashflow and EBITDA?

I feel slightly embarrassed talking about this, since cashflow and EBITDA are such basic business concepts. They’re also terribly boring, I think, if they’re taken on their own.

I think a good way into the topic (that isn’t 100% tedious) is to read The Outsiders and see if you enjoy the capital allocation lens that Thorndike talks about. (For a shorter overview, I recommend this podcast episode with Thorndike.)

As you read, Google for each of the financial metrics that are used in the book. Investopedia is usually a good source of information here.

Then, to get a better feel for what these metrics tell you about a business, I’d recommend reading business biographies while asking the following questions:

You can actually apply this to just about every business biography you read. For instance, I learnt a great deal applying it to:

Books are incredibly time consuming, though. Here’s an alternative hack: subscribe to the Acquired podcast and work your way through their backlog!

The first half of each episode is ‘story of the company’ (which is incredibly entertaining), and the second half ‘financial analysis of the company’. Both hosts have tech + finance backgrounds, and they just assume you understand the financial terms that they throw around. This is a really quick way to pick up on the finance worldview.

My favourite episodes: SpaceX, the NBA, and ARM.

Andddd … speak of the devil: 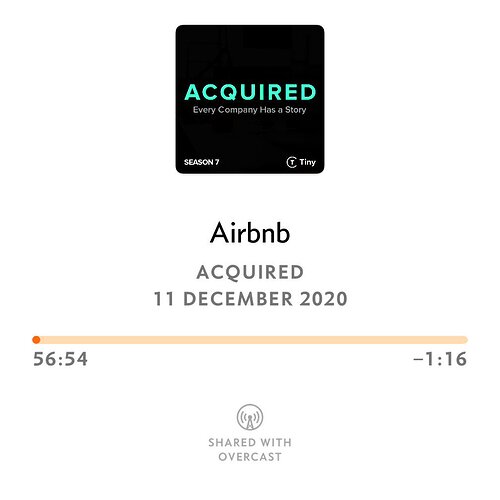 It’s a companion to his book Expectations Investing. I’m planning on doing these tutorials and then reading his book, which is supposed to have a new edition soon.

Thank you for linking to this! I had no idea that Mauboussin had online tutorials for expectations investing!

(That’s another book that’s high on my toread. I’m hoping to make a dent in my backlog over the next two weeks.